At the age of 3, Ivan IV Vasilyevich succeeded his father, Vasily III, to become Grand Prince of Moscow. He wasn’t a Romanov; he was from the House of Rurik. When Ivan the Terrible was only 16, he became Tsar of Russia in 1547. At that point, Russia wasn’t a huge European power the way we think of it today.

Ivan was unmarried — a problem. So, he did what any sensible, unmarried, newly crowned Tsar would do. He set up a brides show to choose a wife. Out of almost 1,500 women, Ivan decided on Anastasia Romanovna. She was known to be a very beautiful woman, whom the Tsar liked immediately. Two weeks after being crowned, Ivan married Anastasia, and she became his first Tsaritsa. Anastasia would not meet as terrible a fate as some of Ivan’s other wives. The Tsar liked her very much, and Anastasia was a calming force on the easily angered king. Ivan seems to have truly loved Anastasia.

Anastasia had six children with Ivan, but only two survived to adulthood, both sons — Ivan Ivanovich and Feodor. Feodor would later become Tsar Feodor I. Remember Ivan Ivanovich, though. Anastasia never enjoyed good health, mainly because of giving birth to many children, and many diseases that nobody could do anything about. In 1560, after 13 years of marriage, Anastasia Romanovna died at around the age of 30. Ivan the Terrible’s reaction? He didn’t just get over it and remarry. Ivan blamed the boyars, or nobles, for his wife’s death, and said that they poisoned her. He had many of them executed, and his descent into paranoia escalated.

Anastasia might have actually been poisoned. We now have evidence that there was a lot of mercury in Anastasia’s hair, but that might have been there as it may have been a treatment for her many illnesses.

You might have noticed something about Anastasia’s name immediately: “Romanovna”. If you immediately thought of the later Romanov dynasty, your brain is working well. Anastasia is the person who connects the Romanovs to the Rurikids. This is pretty much how the Romanovs came to power: after Ivan ran out of heirs and people pretending to be his heirs, they looked at Tsar Feodor I’s mother’s family to find the new Tsar. That new Tsar ended up being Anastasia’s brother, Nikita’s, grandson, Michael I.

While Anastasia was on her deathbed, legend has it that she told Ivan that no matter what, he shouldn’t marry a pagan. Not long after Anastasia’s death, Ivan began looking for a new wife. The next beautiful woman he found was Maria Temryukovna. Maria would have been considered a pagan, but Tsar Ivan didn’t care. She was so beautiful, so he had to marry her immediately.

So, she was baptized and given the name Maria Temryukovna (her name was originally Qochenay bint Teymour). Interesting side note: when they married, in 1561, Ivan was negotiating a marriage with a Polish princess, Catherine Jagiellon. Unlike Anastasia, Maria didn’t fit in with the royal family at all. She was rude to Ivan’s sons by Anastasia and was illiterate. People even called her a witch.

She had a son, Vasily, but he died in infancy. Vasily might have saved Maria if he’d lived. Maria was mysteriously poisoned in 1569 and died at the age of 25. Most people say that Ivan, who got bored of his wife, was behind it all. If he was, then he covered it up masterfully. Once again, many boyars were tortured and executed following his wife’s death.

See, Henry VIII? There are easier ways to get rid of your wife.

Once again, the search for a new wife commenced. In 1571, out of many women he was shown, the Tsar chose Marfa, the daughter of a merchant. After only a few days, Marfa fell ill and died, again of poisoning. It’s likely Ivan wasn’t behind it this time. It’s also possible that Marfa died because her mother, or someone close to her, gave her a fertility potion that they didn’t know was poison.

By now, Ivan must have gotten used to torturing and executing boyars for maybe, possibly murdering his wife. Yes. It happened again. This time, a lot of Marfa’s relatives were executed, as well as Maria Temryukovna’s brother. 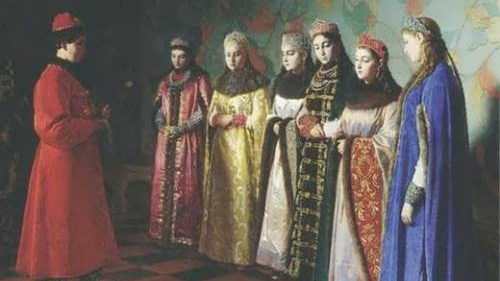 Very soon after Marfa’s death, Ivan began looking for a wife — again. The Russian Orthodox Church basically said that 3 is enough, if you marry again, it’s impious. Ivan, always ready to remarry, said that he had never consummated his marriage with Marfa, and therefore the marriage was invalid. That conveniently meant that Ivan could marry for the fourth time. The church didn’t recognize any of Ivan’s marriages after this Anna.

Despite the church trying to dissuade him from a fourth marriage, Ivan went ahead and married another woman. This time, there was no inspection of the Tsar’s future wife. Who was the next unlucky lady? Anna Alexeivna Koltovskaya. They married in 1572. If you remember, both Anastasia and Maria had given birth to sons, and Marfa had only been married to Ivan for a week or so, so she didn’t have much time to have children.

Anna didn’t get pregnant for a while. Ivan, tired of her, decided that he could get married again, to a woman who would give him children quickly. He sent Anna to a convent, only a few months after marrying her. Since it was only a few months, it might not have been because of Anna’s “infertility”, the Tsar just might not have liked Anna. Anna would end up outliving Ivan in various convents by a few decades.

Once again, without the church’s permission, Ivan married another Anna — Anna Vasilchikovna. What do we know about this Anna? Well, nothing much. In 1575, she married the Tsar but met the same fate as Ivan’s fourth wife, being sent to a convent in 1577. We don’t know exactly why. Anna was later murdered brutally while imprisoned, possibly (and by that, I mean definitely) on Ivan’s orders.

Vasilisa is probably Ivan’s most famous wife. Why? Because her end is the most intriguing. She was the widow of a Prince, and somehow, became Ivan’s sixth wife. Vasilisa was a gentle and beautiful woman, whom Ivan was smitten with on the spot. If she was his wife, they would’ve married around 1579. If. She might not have been a wife of Ivan, but only a mistress.

Ivan soon found out that she was having an affair with another prince, and guess what? He sent her to a convent. But not before forcing her to watch her lover be executed in front of her. And it wasn’t just some regular beheading or something — Vasilisa’s lover was impaled. That must have been a horrible experience for her. She was soon sent to a convent — by that, I mean imprisoned — and disappeared, probably murdered, like Ivan’s fifth wife. 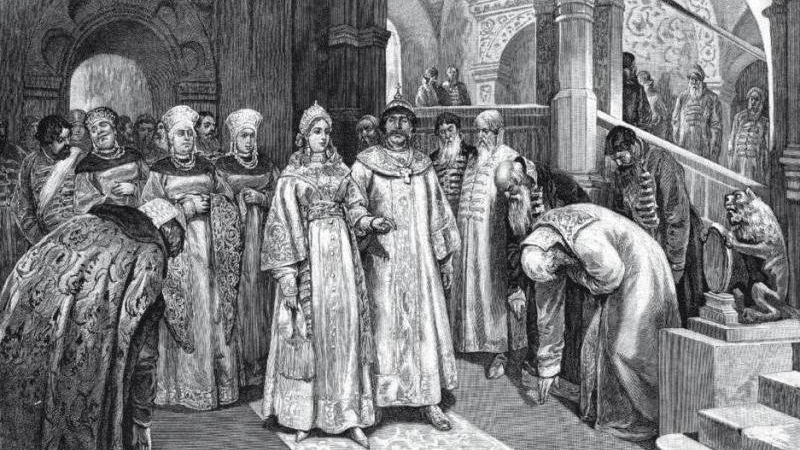 Maria might have been completely fictional. If she wasn’t, she would’ve been a descendant of Prince Yuri of Kiev, one of the men who helped found Moscow. That connection would likely have been why she was chosen. They married sometime in 1580.

The marriage turned out to be yet another failure, and Ivan soon discovered that Maria was having an affair. Ivan had his wife drowned the same year of the marriage. Henry VIII is such an amateur. All he did was behead his wives. And only two of them. Since Maria may have never existed, Ivan is sometimes considered to have only had 7 wives, or 6, because Vasilisa may have just been a mistress.

Just the way Henry VIII preferred Catherines and married three of them, Ivan the Terrible seems to have liked Marias and married three of them as well. This next unlucky Maria, if you’ve been counting, was the 8th and last of Ivan’s wives. He married Maria Nagaya in 1581 when he was 51 years old. The two didn’t like each other, and Ivan even began planning to divorce her.

Luckily for her, she would be spared, as she became pregnant, and gave birth to a son, Dmitry. Interesting side note: Ivan the Terrible might have had syphilis. It was also during her tenure that Ivan Ivanovich — the heir to Russia, and Anastasia Romanovna’s eldest surviving son — was murdered by his father. It’s quite obvious that around now, Ivan was, well, quite mad.

A problem that was solved with his death in 1584. His eldest surviving son, Feodor, succeeded him and became Tsar Feodor I, but he was still too young to rule without a regent. What did Ivan’s death mean for Maria? She was exiled from court. Her son died mysteriously soon after. One source says that Maria and her brothers claimed that Dmitry had been murdered, and they gave their support to a riot against those they thought were the killers. They were soon accused of negligence, and Maria’s brothers were imprisoned, while she was banished to, surprisingly, a convent.

She was forced to acknowledge an impostor known as “False Dmitry” so that she could be released. It must have been horrible for her to have to deal with an impostor. Nevertheless, her family soon regained their wealth. Soon, False Dmitry, now Tsar Dmitry, made a huge mistake by marrying a Roman Catholic woman who wanted to convert Russia to Catholicism. Tsar False Dmitry I was killed by a mob because of that. Maria then denied that False Dmitry was her son and died soon after. Maria Nagaya ended up somehow surviving her husband.

Tsar Ivan had a few children with his many wives as well:

2 thoughts on “The 8 Wives of Tsar Ivan the Terrible”

Od’s fish! But this is the poorest company I ever was in!